The Corbin 35 almost, but not quite, became a reality. It was offered for sale in 1981 and a few were ordered, but then disaster struck in the shape of the factory fire in 1982. 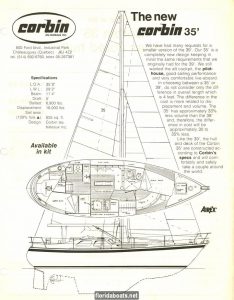 “There never was such a thing as a 35′ Corbin. We were making the mold of a 35′ when the factory burned and we did not have enough insurance to cover the mold and it was never rebuilt. Consequently, we never made a 35′ sailboat. We had a few sold, but we made a deal with those customers to buy a 39′, instead.”