Know your mould number and your HIN

The mould (or mold as the Americans would say) number is simply the sequential number corresponding to the order in which hulls were moulded: 1, 2, 3 …. etc. The hull moulds for a Corbin 39 were actually a left-hand and a right-hand pair of moulds that were then fully bonded together to form the full hull, with an integral keel (there are no keel bolts !). Given that about two hundred hulls were made it is best to quote this as a three-digit number: 001, 002, 003 …. etc.

We do not have a full set of records of the hulls that were moulded or who the original buyers were. According to Marius Corbin the late 1982 fire destroyed all the records to that date (which probably corresponds with hull #128, which was the youngest hull to be destroyed in the fire) and that may account for some of the confusion. The other reason is likely that the self-fit-out nature of many of the hulls meant they passed into the hands of owners who then, or subsequently, were less concerned about paperwork. After all they had fitted out their Corbin, and what more was there to know. However originally all the owners certainly knew their mould number and used it to assist in identifying various matters.

We periodically publish an updated Summary List of all the Corbins we have located, including the mould number and/or full or partial HIN. If you can add any information to that please contact us.

The Hull Identification Number (HIN) is a fairly internationally recognised alpha-numerical sequence that uniquely identifies your boat. There are a couple of different formats to it (as it has evolved into CIN and etc formats), but all the Corbins are in the same ‘straight-year’ format. It should be stamped onto the hull in two places: on the upper transom, and somewhere out-of-the-way in the interior. Unfortunately we don’t know where (or if) the interior stamp was ever put in place, but the Corbin transom stamp is ordinarily a few centimetres beneath the stern rubbing strake, and generally on the starboard stern but occasionally on the port stern.

Here is the actual HIN stamp on #123, Bockra – it is just above the ‘r’ on the starboard stern, below the metal vent. 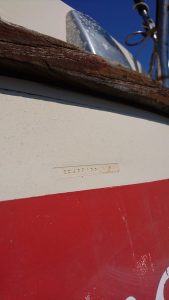 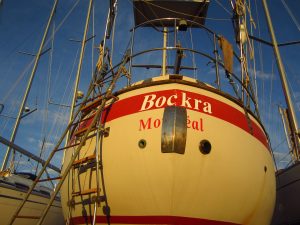 Some online explanations of the HIN system are (boatsafe, here) and (hinsearch, here) and USCG (here) or (hindecoder, here). Many other links are available online.

For Corbin the first three letters are ZCJ, corresponding to Corbin Les Bateaux Inc of Napierville, Quebec, Canada who were in business from 12/12/1978 to 12/9/1997.

The second group are five numbers corresponding to the mould sequence. So for most Corbins that will be something like 00123. The last four digits correspond the month and year in which the hull was moulded. Note this is not the year the fit out was finished which could be very different indeed. 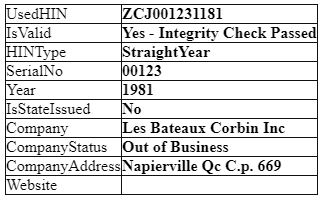 A few things to be aware of are.

Yes this does matter. You want to know the history of your Corbin before you buy it, or before you sell it. This is especially so because there are rumours of a few ‘extra’ Corbin 39 hulls that may have been un-joined when the Corbin yard stopped making them in the early 1990s. If so the quality control on those might have been somewhat different, we simply don’t know. This affects the value of your boat. It is important.

Check the stern of your Corbin very carefully indeed. Check the paperwork very carefully indeed. Check any other registration numbers, or tonnage board numbers. Email us to discuss what you can see either on the boat or in the paperwork. Send us photos, of the boat and of the HIN stamp. We have quite a few scraps of information in our personal files that may, together with your scraps of information, be able to solve the puzzle for your Corbin. In doing so, through a process of elimination, this may help solve the puzzle for other Corbin 39’s.

Is there only one HIN stamp ?

In August 2021 we (DS) were able to speak with Gaetan Duchesne who worked for Corbin Inc between 1977 and 1990/1992, and was the production manager for much of this time. He explained that Corbin Inc only stamped the HIN in one place on the stern. Some owners may have stamped the HIN themselves in a second place internally, but if so that was entirely an owner-specific decision.