I’m finally biting the bullet and reluctantly giving up our trusty Force 10 kerosene stove for a propane stove. Our Corbin, #005, Witch of the Wave, is the original design. I’d like to hear from other Corbin owners of this hull design about where they placed their propane tanks. Best Regards, Vince Salese (#005, Witch of the Wave) 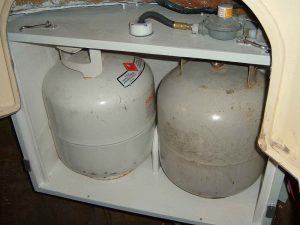 b. I have a center cockpit, but I think that this would work with your boat. I have a deck box immediately in front of the mast with a 10# bottle and regulator. The copper propane line is fed through the deck and follows the mast compression post to the floor and then to the stove. The box was built of fiberglass over plywood. It helps to get up to the main when dropping it too. (I would improve the design by making the box slightly larger to allow for a second 10 lbs bottle.) Hope this helps. Dave Lundin (#074, Romana) New Glasgow, Nova Scotia.

c. I have a small box that fits two 10 lb tanks under that back seat. The back seat with the hump you sit on while piloting. The line runs down the port side to the stove. I have a safety overflow line from the box right out the back center. Tom Knight (#157, Fabled Past)

d. Vince, I have hull # 127 which is of the newer design so I’m not sure how much this differs from yours but, I recently glassed in two propane storage tanks inside my aft cockpit locker. There is enough room on either side of center to have storage lockers to carry a 20lbs tank in each. You can set it up to have one active and one spare (replace the active one when it runs out) or, as I did I installed a selector switch so the second tank is plumbed all the time. It means an electric solinoid for each however. Part of the project included a new propane sniffer and electric solenoid shut off system. I opted for the twin sensor so I could place one sensor in the aft locker just outside the two storage lockers and one under the galley stove. The detection system differentiates the source from one sensor or the other. The plywood is only installed but not glassed in yet. Be sure to do a good job of glassing it in and sealing everything, and of course installing a vent to the outside. This location was ideal since the bottom of the locker is still above the waterline to accomodate the vent. Install a seal around the door and positive latching. Good Luck! Jack Verheyden (s/v #127, Kathrian).

e. We had a SS propane “locker” when we bought Necessity (#135, Special Edition) which was unsuitable and unsafe. Shortly thereafter we met Art Berdusco “Work of Art” who showed us his propane locker which was built into the stern curve under the helm seat on his Corbin. It takes up part of the large locker but holds 2 – 20 lb tanks and still leaves us plenty of room and access. We had our local yard construct it out of plywood with an overboard vent and we are very pleased with the installation. There is a foam gasket on the forward facing side for tank to seal the access door which lifts out for tank removal. [Pictures on the website.] Let me know if you have questions. Brian Hall (s/v Necessity) (#135)

f. I built hull #90 and have had propane since the start. She has a 3 burner stove with an oven and a 20000 btu hot air heater. Originally I used a 20 pound cylinder located in the cockpit under the helm seat. The location works well, it is out of the way and the cockpit drains any spilled propane overboard. A couple of years ago we went to the Abacos for the winter and switched to two 11 pound tanks located in the same area (2 tall tanks fit neatly under the helm seat). These tanks are much more convenient when you have to transport them for filling, plus you have a spare when one runs out (not to mention 2 extra pounds). From NJ to the Bahamas I had little problem locating a propane fill station. I also have a rail mounted BBQ that taps into the large tanks with a hose that replaces your small cylinder (available at most hardware stores). If anyone is considering CNG let me say that it is not widely available (none in the Abacos). I had one friend from the Baltimore area, I met in the Bahamas, who had to send his CNG tank by freighter back to the US to get it filled. Best Regards, Bill Schwartz (s/v #090, Moonshadow).